Who else is on this volume?

As well as a great many established musicians of every stripe K’s Choice features a number of younger artists whose musical journey is just commencing….. here are just three of them.

Twelve year old Millie Courtney is one such rising star. With the support of her loving family Millie has spent the last year or more visiting various acoustic events in and around Liverpool to play sets of her own self-penned songs.  She has played K’s Choice events a couple of times, she regularly supports Liverpool Acoustic open mic gigs and often performs at Ian Prowse’s Monday Club at the Cavern Pub.

Millie down at the Liverpool water front

Recently the VRadio Nashville radio station in far off Nashville, Tennessee started playing her song “Feels Like Heaven” on air and those good ol’ southern folks just seemed to lurve lil’ ol’ Millie!  Within a couple of weeks “Feels Like Heaven” was voted number one on the station’s playlist and it has stayed in the top 10 for five weeks now, and counting!  Not bad for a girl, who’s still at school eh?

“Feels Like Heaven” features as track 13, disc 1 on the K’s Choice volume 2 album.

Millie with Ian Prowse at the Cavern

Out of a similar mould is fourteen year old Eleanor Nelly.   Eleanor also enjoys the support of a family who take her all over the city to ply her craft.

Described by musician Gary Edward Jones as “an absolute ray of sunshine” Eleanor has become a regular performer and firm favourite at the “Fresh Sessions” acoustic gig at Penny Lane wine bar “Schmooze”. 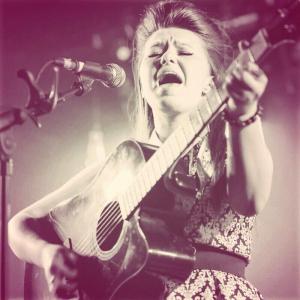 Eleanor does what she does best!

Armed with the fearlessness of youth, formidable energy, and one of those voices that makes people stop what they’re doing and listen, Eleanor turns up to play in all kinds of Liverpool venues, big and small.  Perhaps her biggest gig (for the moment anyway) was a support slot she recently performed for local band the Hummingbirds at Liverpool’s 02 Academy.  For the K’s Choice volume 2 album Eleanor offers us an acoustic guitar folk song entitled “Dark Wood” where she allows her powerful voice to soar.  “Dark Wood” is at track 10 on disc 2.

Ever so slightly older and with a simply incredible amount of experience of live performances for one so young is the frighteningly talented Vanessa Murray.  It seems like Vanessa has been performing at gigs around Liverpool for ages, so it is odd to think that she is still only nineteen years old. Like Millie and Eleanor, the backing of a loving family has been vital on her musical path. 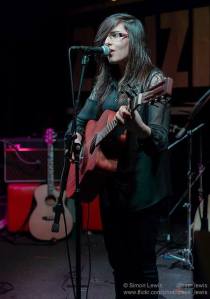 Vanessa’s whole being is of course her music, but she also does a pretty darn good side-line in winning competitions! I expect I’ve missed a couple of competitions she’s won, but she first came to my attention when she won the Liverpool Acoustic Songwriting Challenge in 2012, mesmerising the judges (and me) with her song “I Don’t Want To Lose You Like This”. Since then Vanessa has gone from strength to strength – it seems that barely a week goes by without her winning herself a new guitar, some free recording time or some other highly valuable musical commodity!

Just a girl and her guitar…!

In 2013 the PRS for Music Foundation and UK Music awarded Vanessa a £2,000 grant as part of the Rehearsal Spaces scheme and Rock the House. She was presented with a cheque at a ceremony at the House of Commons, where she performed in front of several music industry representatives (including Queen legend Brian May) and many MPs.  In 2014 she won the category of Best Female Acoustic Act at the Liverpool Musicians’ Awards.

Vanessa has just completed her first year at the Liverpool Institute for Performing Arts (LIPA) and it doesn’t take a genius to see that this girl has a wonderful future ahead of her.

Vanessa’s song “Life’s Too Short” features as track 6 on disc 1 on the K’s Choice volume 2 album.

Good luck to all three of our young songstresses, and as someone famous once said, “Thank you for the music!”