K’s Choice acoustic events have taken place at several venues in recent months including Unit 51 in the Baltic Triangle, the Valley Community Theatre in Netherley, and the Hatch in the Hopskotch Street Kitchen & Bar in Liverpool’s Mathew Street.

On this page we’ll try and keep you up to date with everything we’re doing! 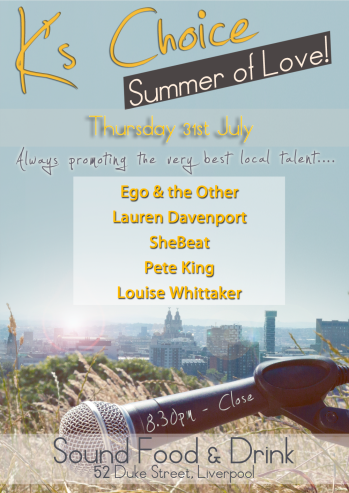 Volume 2 of the K’s Choice compilation album will be launched at a free event at Sound Food & Drink, Duke Street, Liverpool from 8.00pm on Friday 30th May.  The event is free and copies of the album will be on sale at a special promotional rate of £5 on the night. 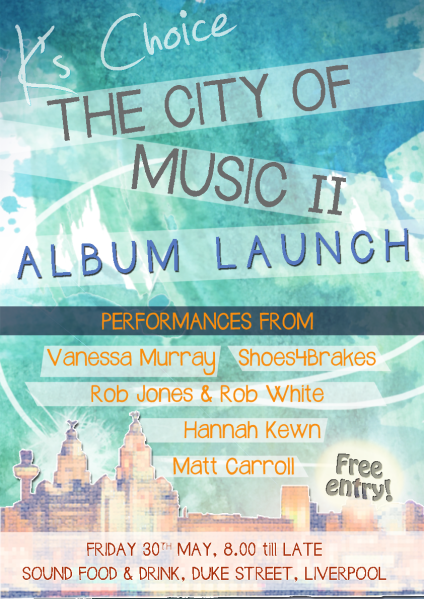 If you can’t make it to the launch, don’t despair!  You can order a copy of the album to be sent to you – just click here to find out more about the album and make an order. 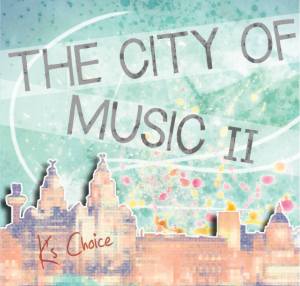 The evening, hosted by Liverpool musician Derek King, will feature performances from:

Rarely does an artist like Chris Pureka come along. In an age of fleeting success and temporary notions, Pureka is an artist of substance, armed with a sharp eye for oft-missed details and an emotional intelligence that can switch from withering to compelling with a subtle inflection. Now, with her third studio album How I Learned To See In the Dark, Pureka adds some bold new elements to the soli…d foundation she has been building throughout her ever-escalating eight-year career.

Kalandra is a folk/rock band based in Liverpool, consisting of musicians from England, The Isle of Man and Norway. Led by vocalist and songwriter Katrine Stenbekk, Kalandra’s music draws influences from Norse and Celtic folk songs with a powerful mix of unforgettable melodies, dark themes and heavy arrangements.

Paris-born Tiki Black was raised in France and Cameroon and currently lives in Manchester and her music reflects her very multicultural background. Her passion for words and music sustained her during challenging teenage years when family hardship forced her to become self reliant very early on, and her lyrics reflect her many and varied experiences. Her songs, sung in English, French and her native Douala, with piano accompaniment, never fail to move audiences.

Tom Freeman O’Rourke has been a part of Liverpool’s music scene for more years now than he cares to remember….! He has played with several bands and musicians over the years and can be found gigging regularly in and around Liverpool with the raunchy “Balls Band”. In quieter moments he enjoys gigging solo, armed with just his acoustic guitar and a bag full of songs, some old and new, but all wonderfully performed.

Plus special guests to be confirmed………. Yet another fantastic line-up at K’s Choice!

For our first monthly gig at Unit 51 we are delighted to welcome instrumental and vocal duos Fran & Fred and Acoustic tales, singer/songwriter Kevin Critchley, classic tunes from the Salty Old Sea Dogs, and some virtuoso guitar work from John Chatterton. 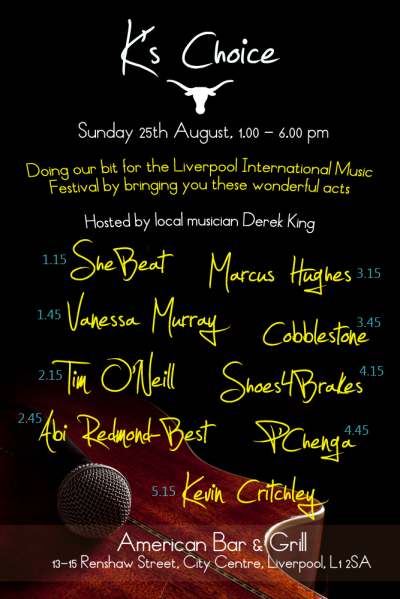 This Wednesday is the launch night for the K’s Choice City of Music 2013 compilation album, and we are excited to present performances from four of the artists who have tracks featured on the album: Gary Gardner, Chris Callander, Shannen Bamford and headlining, Robert Vincent.

Because this is a special night there is a small admission charge of £4 on the door, or you can pre-order tickets for just £3 by clicking here https://kschoiceacoustic.wordpress.com/the-city-of-music-2013-album-launch-party/  Ticket includes first drink!

Also available on the night at the special pre-release price of £4 will be the K’s Choice City of Music 26 track double CD album, and advance tickets for the CD launch party on 21st August, priced just £3.

We also have a “K’s Choice on tour” stage from 2.00 – 5.00 at the Summer Music Festival at the Valley Community Theatre, Childwall Valley Road, Netherley on Saturday 17th August.  There will be live music inside and outside all day and evening, plenty of fun and frolics and a licenced bar too, entry just £4.  Click here to find out more https://www.facebook.com/events/500413716699448/