On a bright spring Tuesday evening, at an event hosted by local musician Derek King, K’s Choice made itself well and truly at home at the Sound Food & Drink cafe-bar on Liverpool’s Duke Street.  Discerning folk were treated to a wonderful array of performances from some of the finest local singer-songwriters.

Up first was Gary Maginnis, a Northern Irishman, who now calls Liverpool his home.  Gary took us through an interesting and varied set, delivering slow and quite sombre songs with some aplomb and moving seamlessly into much more upbeat melodies.  On one of his upbeat numbers he played his acoustic guitar using a banjo style finger picking technique – it sounds like it shouldn’t really work, but it damn surely did! 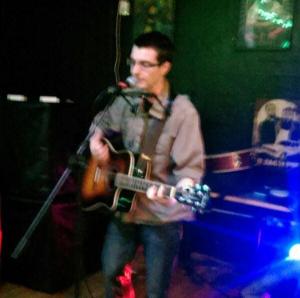 Next up came Welsh songstress Grace Hartrey – along with several of her friends, who formed a pretty unique kind of band.  There were two boys forming a rhythm section of bass guitar and cahon, two girls on cornet and violin, both of whom also sang tight and smooth vocal harmonies, and Grace herself on acoustic guitar and lead vocal.  There was a feel-good quality to this group’s performances of their beautifully crafted original songs that was truly astounding.

Following the band was local lad Edward Latham, who delivered a set of his own compositions with an easy, smooth and confident style.  His guitar work is assured, neat and tidy, intricate without being too clever for its own good, and it sets off his rich and powerful voice wonderfully.  It was during Eddie’s set that the bar became busy and he clearly enjoyed himself interacting with a fairly boisterous, though very good natured crowd.

And now, as the saying goes, it was time for something completely different….!

“Herringbone” John Hall took centre stage armed with his slide guitar, and took us way, way down south….  John did great justice to a couple of slide guitar classic covers including a Muddy Waters number, before moving onto more contemporary things like Wilko Johnson and a fair smattering of his own compositions, including the unforgettable “Martin Luther King Said”.  John’s final number was performed with a slide guitar he had fashioned himself from a cigar box, which I guess honest god fearin’ folk in the deep south used to do….  As I say, something completely different!

A great final act after such a rich range of styles and exquisite performances.

Join us for the K’s Choice City of Music volume 2 compilation album launch party at Sound Food & Drink on Friday 30th May.