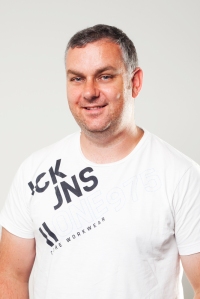 Gary Gardner is such a nice guy – he is instantly friendly and personable, and there is just a hint of a quite endearing shyness about him.  He had a lot to tell me, he is a really interesting man, all his stories delivered diffidently and with the most self-effacing and unassuming of smiles.

Gary is a native of Liverpool and spent his younger adult years living around the Lark Lane, Picton and Kensington areas, though these days he is Lancashire based, just a short drive from the 2008 Capital of Culture.  We caught Gary after a busy day’s work – he is an IT consultant in his day job – but we were more interested in the roots of his music.

Coming from a musical family, Gary started to learn classical piano at the age of 8, “but once I turned 18 I switched to guitar,” he tells us, “I started playing at the Everyman youth theatre and loved it, and I ended up working there, helping out with the music in shows and that sort of thing.  There was a group of us and we used to go abroad to Germany and Spain and other places with shows.”  He clearly remembers this as a golden chapter in his life.

Then everything changed when he met the girl who is now his wife.  “I stopped playing for a long long while, my focus and priorities changed I suppose.”  He clearly doesn’t regret anything; setting up home and raising children changes most people’s focus and Gary is no exception.  “When we started seeing each other things moved very quickly, within a year we’d moved out to Burscough together.  We’ve lived there happily ever since.”

So what else did Gary have to tell us?  Read on to find out….

Q.   Tell us something unusual about yourself….

A.   Well, I’ve been playing as a musician for well over 20 years but would you believe I’d never played a live solo gig until I did K’s Choice in April this year.  It’s all totally new to me, I didn’t think I’d ever do it actually to be honest, but I’m glad I did!  What motivated me was that at my 40th birthday last year Henry Priestman from the Christians came to my house and did a show.  I played some of his songs with him and he played some of mine, and it spurred me on to work harder at my music.

Q.   So how come he played at your birthday party?  Did someone organise it as a surprise or something?

No, I organised it myself.  I got in contact with him and asked him if he fancied playing at my birthday party, and he said yeah, he’d love to.  We’ve been in touch ever since, I’ve played again with him and with Pete Riley.  At the Liverpool Museum Pete was doing a talk on the history of music through the 70s and he asked me to get up and play a song with him. It was nice, that! (a master of understatement is Gary!)

Q.   What other Liverpool venues have you played?

A.   I played at Resurrection Festival along with Shannen Bamford, and at the Wirral Festival and Leyland Festival.  I’m playing at Oxjam later this year.  At the Leyland festival there was a couple sitting in front of me while I was performing and they joined in with one of my songs.  They’d obviously listened online, and learned the words.  That was nice and gave me loads of confidence.

Q.   As someone living just outside Liverpool, what do you think of the city?

A.   You can see how special the place is, it really shows.  The capital of culture bid was a real big turning point I think, and the city has gone from strength to strength ever since.  There is so much good music coming from the city, and it shows no sign of slowing.

Q.   What’s the inspiration behind your song on the compilation album?

A.   The short answer to that is there wasn’t any inspiration – which is rare for me!  I wrote it back while I was working at the Everyman Theatre.  One day I’d been given tasks on what I should write about, drug use, homelessness and stuff, and on that particular day I couldn’t think of anything, so I just started to write any words that came into my head.  The next day I did the same and eventually the song “Someone’s Looking Over Me” grew from it.

Q.   How do you write songs?  What process do you follow?

Normally I start and finish them very quickly, I’m quite disciplined like that.  If they take too long I tend to scrap the idea and move onto something else.  I’ve got folders at home full of stuff that I haven’t used.  Sometimes I go back and pick bits out and fit them in somewhere else, so nothing gets wasted really.  One of my songs “Humankind” is full of bits and pieces that didn’t fit into other songs.

Q.   Are there any musicians you’d like to work with?

There are loads!  There are lots of local people I’d love to collaborate with, who are working at a level higher than me at the moment (there is that self-deprecating persona again!), but now I’m up performing and gaining confidence, I’ll probably approach people soon to ask about collaborating.  Henry Priestman is releasing a new album next year and there’s a possibility of me doing some support slots for him when he plays locally, which is pretty exciting.

Q.   What are your musical influences?

A.   Many and varied!  In the late 70s I was into Genesis and then Peter Gabriel.  I loved the way those guys experimented with sound. Later on I got into Fleetwood Mac and Kate Bush.  In the late 80s I became a bit more selective, got into local bands, because I could go out and see them, the Christians, the La’s, Shed 7 were some of my favourites.  I love the Stereophics, I’ve seen them about 30 times now – perhaps that’s where the slightly morose feel in my songs comes from!

Q.   Do you ever get shy or nervous about performing your own songs?

A.   I do, yes.  I’m not very good with people saying negative things; I know it happens but I’d rather not hear it, see it or read it.  Up to now I’ve not heard a negative, but I’m sure there must be people out there thinking, ooh that’s not very good.  You can’t please everyone I know, but I do worry what people think.

Q.   What’s more important to you, lyrics or melody?

A.   Lyrics draw me in more than anything else.  The melody can pull you in if its a catchy tune I suppose, but I like slower kinds of music with well crafted lyrics that tell a story, and have some meaning.

Q.   Is there a song that makes you cry?

A.   There is one song, but I’m not sure if I should go on record with it!  No, I’ll keep quiet on this one.  But what stirs emotion in me is usually the context of the song and the story that it tells.

Q.   What is the proudest moment of your life?

A.   My wedding day, nothing can top that, we had such a brilliant day, just laughed all day.  It’s ten years ago this Thursday.

My proudest moment as a musician was when I played in Germany back in 1992 with the group from the Everyman theatre and we had a great time.  We played in this university, someone must have told people that we were famous or something, because we got filmed and interviewed and people queued for autographs.  It was magical!  We played 6 songs which I don’t think were very good actually, but people loved us!

Q.   What do you think of self published music?

A.   It’s a good thing in my opinion.  If not for the web and self publishing I’d never have got out there playing.  You’d have never heard of me and asked me to play K’s Choice would you?  People in all kinds of places, even overseas have heard my music through Soundcloud and it’s a great thing.

I was in a music shop in Hereford once looking at ukuleles and I heard some music playing and thought, hang on I recognise that – then I realised it was my song “Humankind”!  I asked the guy in the shop how come he was playing my song, and he told me it was an internet folk radio station.  It was a strange and surreal moment that wouldn’t have happened without self published music.

To find out more about Gary and links to his other work click https://www.facebook.com/garygardner33

To buy a copy of the album please click https://kschoiceacoustic.wordpress.com/the-city-of-music-2013-compilation-album/